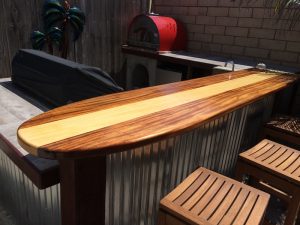 My Pizza Journey is Scott’s adventure through the world of Pizza.

In 1983, Scott got his first “real” job working at a little place in Oakhurst California. Back then it was called “Danny’s Pizza”. The owner, Dan Wheeler was a patient of Scott’s step dad and hired Scott as a favor. The job lasted less than a month.

When you think of pizza, you think of flour, water, tomato sauce, a few spices and some toppings. Who could screw that up? Scott did and it has haunted him ever since. About the only thing he got right was making the sauce. He couldn’t make the dough or toss the dough. In a place that has the motto was “We toss’em, they’re awesome” tossing was critical.

Year’s later the name was changed and that little pizza shop has become “Pizza Factory“. A national chain of restaurants that keep that small hometown Pizza feel. Being the over the top OCD guy that Scott is, he never let go of his failure. While walking through the Orange County Fair he saw a pizza oven. He decided to build his own. When his wife found out how long it would take and how big the mess would be, she bought the oven for him at the fair.

At the time Scott was eating “gluten free” making the pizza challenge all the more difficult. That didn’t hold him back, and now he is ready to share that incredible journey. My Pizza Journey actually starts with “My Sourdough Journey“. Sourdough is the secret that let Scott eat bread again.

Visions : Art In The World Of Surf